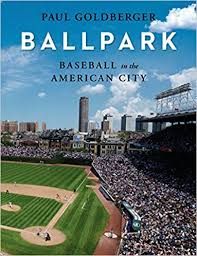 Goldberger expresses the history of the ballpark in American cities through four phases, ones that urbanists will appreciate perhaps even more than baseball fans. “The ballpark is one of the greatest of all American building types, and it reveals as much about how we treat our cities today as it ever has in the past,” he writes.

In the first phase of the ballpark, the American city was still a compact center of homes and businesses. The owners of baseball teams, not yet thinking that they could get the public to pay for their playing fields, located their ballparks as close to the center as they could afford. A distant, more affordable site farther from downtown could be made to work thanks to close proximity of trolley lines or subways. The best ballparks offer the fans “an intimacy,” Goldberger writes, “since their different layouts all have the ability to make fans feel connected both to the field and to each other.” They are the epitome of any great public place.

The best ballparks offer the fans “an intimacy, since their different layouts all have the ability to make fans feel connected both to the field and to each other.”

Just as the suburbs began sprawling across the landscape, ballparks entered a second (and unfortunate) phase by looking to the spacious suburbs for large land sites with, of course, plenty of parking. From an urbanist’s point of view, these moves were mostly bush league. “In the city, public space was privileged over private space, and the baseball park was, in many ways, the greatest public space of all,” Goldberger writes. “In the suburbs, the equation was reversed: private space was privileged over public space, which meant that the ballpark as it had grown up over past generations did not fit naturally into the scheme of things.”

Even worse, many of the suburban stadiums were designed for both football and baseball, with sight lines especially bad for baseball fans. The new circular stadiums offered no views of the outside world (not even a glimpse of the sky if they were covered by a dome), and no visual connection to the skyline of the city with which its team identified.

And they all looked the same. Goldberger quotes the Pittsburgh Pirates third baseman, Richie Hebner, referring to a 1971 game against the Phillies in Veterans Stadium: “I stand at the plate in Philadelphia and I honestly don’t know whether I’m in Pittsburgh, Cincinnati, St. Louis, or Philly.” The comment makes you wonder why more ballplayers are not involved in ballpark design.

Happily for the game, just as businesses began to regret their flight from the city so did baseball teams. The third phase, as described by Goldberger, was one in which ballparks re-embraced the urban setting. The foremost example remains Baltimore’s Camden Yards, where the new ballpark is knit into the fabric of the community in large and small ways. An eight-story red brick building on the edge of the site, which had been a warehouse for the Baltimore & Ohio Railroad, originally was targeted for demolition. Instead it was re-purposed into offices and support space for the Orioles organization. The street immediately beyond right field, Eutaw Street, was reconfigured so it could be closed to traffic on game days and turned into a pedestrian concourse. The gates are not numbered, but named after the street to which they lead, further tying the ballpark into the neighborhood.

In this third phase, ballparks can revitalize downtown areas as quickly as a tech company opening up shop. The Lower Downtown, or LoDo, section of Denver was beginning to rebound when Denver was awarded an expansion franchise in 1991. The decision to put its new ballpark in LoDo was a home run. “Since the ballpark opened, property values in LoDo and around Coors Field have grown three times faster than the average for Denver,” Goldberger writes.

The fourth and latest phase in “baseball’s evolving relationship to the city,” features the ballpark “as the keystone of a larger real estate development that re-envisions the city as a privately controlled series of spaces that mimic the traditional public space of the city.” To Goldberger this is a radical departure from a ballpark that is part of “the complex stew of the city.” He calls SunTrust Park in Atlanta (or more accurately roughly 15 miles outside the city) and the adjacent development of stores, restaurants, condos, offices, and hotels “a mallpark as much as it is a ballpark.” And a similar one is coming, apparently, at the new home of the Texas Rangers in Arlington, roughly halfway between Dallas and Fort Worth.

Like many good baseball books, “Ballpark” raises a few “what if” scenarios. What if the Yankees, or the Giants, or the Mets had heeded suggestions that they relocate their ballparks to the section of Manhattan’s west side now occupied by the mega-structure known as Hudson Yards? What if Pittsburgh had rallied behind the campaign to save Forbes Field, thereby putting it in a class of icons today with Fenway and Wrigley? And what if Philadelphia had gone ahead with a plan to locate Citizens Bank Park just a few blocks north of City Hall in Center City, instead of the sports complex bounded by expressways where it ended up?

There are heroes and heroines in Goldberger’s book. Larry Lucchino, a bench player on Princeton’s 1965 NCAA Final Four basketball team led by Bill Bradley, went from Princeton to Yale Law School, joined the law firm of Edward Bennett Williams, owner of the Washington Redskins football team and later the Baltimore Orioles. Lucchino ended up as chief executive and was a key figure in the realization of Camden Yards. He later oversaw the construction of Petco Park for the San Diego Padres, and then became CEO of the Boston Red Sox. In that capacity, he helped quash the plan to turn Fenway Park into a tear down, saving it to become the jewel it is today, and, not coincidentally, the oldest ballpark in America.

Lucchino’s in-house architect for the Camden Yards project (and later at Fenway Park), was Janet Marie Smith, an Atlanta Braves fan growing up in Mississippi. But her path to ballpark design came via architecture, which she studied at Mississippi State and pursued as a profession, first working in the 1980s on Battery Park City, a mostly residential project in lower Manhattan. She applied on a whim when she heard Baltimore was planning an urban-centered ballpark. Lucchino was doubtful about her baseball savvy. At her first interview, he asked her to name the league that uses the designated hitter. Her response: “I’m offended by that question.”

A book such as “Ballpark” could have been written by a purist – in either baseball or architecture. Goldberger thankfully is neither. To the baseball purists who argue that some of the new ballparks seem more entertainment arcade than athletic showcase, he reminds people that mixing entertainment and baseball goes back to the late 19th century, when a St. Louis tavern owner built the original Sportsman’s Park as a combined ballpark and beer garden.

To architectural purists, Goldberger points out that “most of the best ballparks have not, in fact, been particularly memorable pieces of architecture by any formal standard: they are irregular, opportunistic structures, often altered and adjusted over the years to respond to changing market demands and changing urban conditions.” As it usually is with the best public places of any sort.

For fathers and grandfathers, “Ballpark” is the perfect Father’s Day gift. For urbanists and anyone concerned about how public places influence – and are influenced by — the cities in which they are located, “Ballpark” is a perfect gift any day.

“Ballpark” surveys virtually every existing park in major league baseball. Some fans might want to read more about their team’s park — or former park. Of the many books devoted to individual ballparks, two are cited by Paul Goldberger in his acknowledgments as “masterworks.” They are “To Every Thing a Season: Shibe Park and Urban Philadelphia,” by Bruce Kuklick; and “City of Dreams: Dodger Stadium and the Birth of Modern Los Angeles,” by Jerald Podair. Both were published by the Princeton University Press, in 1991 and 2017 respectively.