In another column in the “spaces” chapter, Saffron calls out a “high-handed” decision to prohibit “the time-honored practice of parking your bottom atop Rittenhouse Square’s elegant limestone balustrades.” The public interest, in Saffron’s forthright opinion, coincides with her urban sense. “Even though Rittenhouse Square is in the toniest part of town, there is a strong sense that these gracious seven acres belong to all of us. . . A microcosm of the city, the park is the place where we learn to tolerate people who are different from us.”

Saffron’s architectural and urban tastes come from the school of hard knocks. She grew up in the “suburban cocoon” of Levittown, Long Island. She recalls her father’s family losing both their home and their business when their building in Manhattan gave way for a public housing project. After that, she recalls in her introduction, her father’s clothing store in a small town on Long Island “succumbed to the call of the mall.” As a student at NYU Saffron took a few courses in architectural history. At her first newspaper job, in Plainfield, New Jersey, she was amazed to find half the downtown area razed and converted to parking. What had happened, she asked. “Urban renewal,” someone explained.

As a reporter for the Inquirer in Bosnia and Chechnya, Saffron saw the urban destruction caused by those conflicts. When she returned to Philadelphia, she asked to cover the architecture beat. After she turned it into a weekly column she got some advice from a veteran editor, Jeff Weinstein: “He taught me that taking sides is the single most important act of a columnist, and he pushed me to stiffen my spine when I wavered.” (Saffron, not shy about expressing her views, was pressed into speaking last year at a retirement party for a Philadelphia newspaperman ending a 47-year career. Saffron had disagreed with him over the years, and used the occasion to roast the retiree, leaving few stones unturned. The retiree retaliated this year with a defamation lawsuit.) 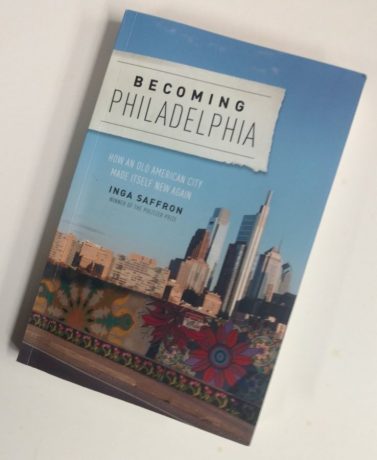 As a columnist, Saffron writes, “I was obsessed with calling out the policies that caused cities to tear themselves apart with highways, parking garages, and wanton demolitions of fine old buildings. . . My first love was never solitary buildings. I am drawn to ensembles and public spaces for the way they reveal the values and forces that shape culture and civilization.” She lists four of her “guides” along that path: Elijah Anderson, professor of sociology and African American studies at Yale; Ada Louise Huxtable, the architecture critic for the New York Times and the Wall Street Journal, urban observer and critic William H. Whyte, and Jane Jacobs.

Echoes of both Whyte and Jacobs can be felt in Saffron’s writing. “Holly” Whyte would be proud of Saffron’s fearless dives into the morass of municipal regulations and their consequences. Until I read Becoming Philadelphia I had never considered the plight of urban residents living in family homes passed from one generation to another who do not possess the paperwork to prove that ownership. Zoning is a subject that brings a glaze to the eyes of many otherwise engaged urbanists. Saffron takes on the Philadelphia Zoning Board of Adjustment on multiple occasions. A seemingly trivial Zoning Board malfeasance, allowing rowhouses with garages fronting on the street despite a recent ban on such garages, has an important repercussion. “Every time a developer builds a garage-fronted rowhouse, the city loses an on-street parking space. A scarce, public commodity is transferred to the private realm.”

Like Whyte, Saffron has an eye for counter intuitive realities. Writing on pedestrian and cyclist safety, Saffron reports on a study comparing two Philadelphia streets, Walnut and Chestnut, with two other wider streets, Market and JFK Boulevard. The narrower ones were safer. On another subject that often triggers a knee-jerk reaction, Saffron writes in a 2017 column: “Philadelphians tend to obsess over gentrification, but the decline of middle neighborhoods is the far bigger challenge.” As Whyte might have done, Saffron relies on studies of census tracts, not popular accounts of trendy neighborhoods.

If you, like me, are not intimately familiar with the city of Philadelphia you might read this book and be tempted to take a road trip to see first-hand how that ground floor of the new Comcast tower is fitting in with the city around it. Or you could check out the new Barnes Museum, brought in from the suburbs to the heart of the city, and judge for yourself the effectiveness of the spaces between it and the other institutions on the city’s “museum row.”

If you, like me, are not intimately familiar with Philadelphia, you might wonder (as I did when I began reading Saffron’s book) how engaged you can become in a discussion of urbanism rooted in a single city. Very engaged, it turns out. Jane Jacobs used her neighborhood in lower Manhattan as the starting point for The Death and Life of Great American Cities. Similarly, Saffron has constructed a Philadelphia story that reverberates far beyond the city limits.

Saffron appears Wednesday, June 17, at 7:30 p.m. in a virtual Crowdcast event sponsored by the Free Library of Philadelphia.