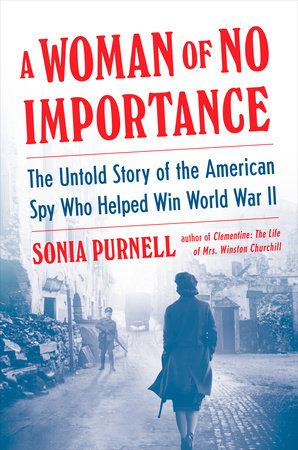 And here’s another story that sounds more like fiction than the nonfiction that it is. An adventurous French woman and licensed pilot, Marie-Madeleine Fourcade, frustrated by her country’s nonchalant response to Germany’s aggression, manages to throw herself into the action, working initially for a magazine covering military capabilities across Europe, then for a center supporting displaced French military veterans (and future resistors), and ultimately as the leader of France’s largest network of spies. Even as she also cares for her two young children, she eventually sees her efforts contribute to turning the tide against the Nazis.

And Marie-Madeleine Fourcade does it all despite her own physical impairment, a displaced hip that forces her to walk with a pronounced limp, a handicap that — in theory — made it even easier for the Gestapo to track her down. She thrives despite rampant chauvinism. The liberated women of the 1920s were looked down on in patriarchal France. The Vichy government set up by the Nazis decreed the death penalty for performing an abortion and prohibited married women from working in the public sector. Fourcade, said a longtime friend, “followed her own rules. Basically, she acted like a man.”

You couldn’t make it up, but Lynne Olson has documented the story in her bestselling book, “Madame Fourcade’s Secret War: The Daring Young Woman Who Led France’s Largest Spy Network Against Hitler,” published earlier this year by Random House.

And now, yet another improbable story: Last month in Philadelphia Nell Whiting and I had tea and dinner with Sonia Purnell, and in between heard her present a wonderful author’s talk on her new book. And this month — Monday, May 13, at 7 p.m. — I will head over to the Princeton Public Library to hear Olson discuss her new book. I couldn’t make this up.

Whiting first met Purnell when the London-based author appeared in Philadelphia to promote her previous book, “Clementine: The Life of Mrs. Winston Churchill,” published in 2015. They met up again in London and also corresponded via e-mail. Then in the summer of 2017 Purnell announced to friends that she was tied up writing her next book, about an American woman spy, and would be unable to spend time at her family’s summer cottage in Normandy. It was available at a very reasonable rent. We jumped at the chance.

Ensconced in Normandy, cheek by jowl with concrete bunkers originally built by Hitler’s forces, we spent several days driving back and forth along the 55-mile swath of the beachhead used by the invading Allied forces. Armed with a book, “D-Day: The Battle for Normandy” by British historian Antony Beevor, I checked the index as we approached various towns and then rattled off the specific role of that location during the war. The realities of World War II were a stark contrast to life there today.

Meanwhile, Purnell was back in London, toiling over the final details of her 352-page biography documenting the American spy’s role in the civilian insurgence that began years before D-Day.

If you were to follow the action in either Purnell’s or Olson’s book you might begin in Lyon, in what the Germans considered the non-occupied zone until November of 1942.

In “Madame Fourcade’s Secret War,” Olson describes Lyon as “the capital of the French underground.” But it also “became a hotbed of Gestapo and Abwehr activity. The major figure of Nazi repression was Klaus Barbie, the local Gestapo chief, who gained notoriety as ‘the butcher of Lyon’. . . Fourcade had no illusions that she would be safe in Lyon, but she had run out of hiding places.” She was also running out of time: She was in the late stages of a pregnancy.

Lyon was also the base from which Virginia Hall plotted the escape of 12 British operatives from an internment camp at Mauzac in 1942. If you think of the movie “The Great Escape,” you should, but not all the prisoners made it in that famous break; all 12 of Virginia’s did (in fact Purnell’s book already has been optioned by Bad Robot and Paramount films — the producers of “Star Trek”).

“Virginia’s daring breakout of the Mauzac ‘terrorists’ had caused uproar at the Nazi High Command and led Hitler to unleash a brutal crackdown in France,” Purnell writes. “Meanwhile, the Gestapo’s most notorious investigator [Klaus Barbie] . . . was also taking a personal interest in Virginia . . . They knew they were fast moving in on the center of the terrorist cell. Someone would break down under torture; Barbie would make sure of it. The Limping Lady of Lyon was becoming the Nazis’ most wanted allied agent in the whole of France.”

For 14 months Hall avoided the Gestapo. She fashioned a multitude of different disguises and managed to effect walking styles that concealed her notable limp on her wooden leg. But then a German double agent, masquerading as a French priest, infiltrated her network of spies and resistors. Her only escape was to flee from France, which she did by trekking two days and two nights in winter over the Pyrenees and into Spain.

When she made it back to London and Britain’s famed MI6 spy agency, the next order of business was to shower her with accolades and give her a relatively safe assignment, posing as correspondent for the Chicago Times based in Madrid.

That didn’t last long. Hall retrained herself as a wireless operator and was hired by the United States’ Office of Strategic Services (OSS), which was charged with infiltrating France in advance of the D-Day invasion. On a moonless night in March, 1944, Hall — her teeth ground down by a London dentist and wearing bulky clothes that made her appear 30 years older — and a male companion were deposited on a beach in Brittany and made their way to Paris. From deep inside Nazi territory, Hall relayed intelligence back to the Allies and coordinated parachute drops of vital materiel into the hands of the French Resistance. As Purnell says, “Don’t think that D-Day was the end of the story. It was the beginning of the end.”

Virginia Hall, Purnell says at the talk in Philadelphia, “is the most extraordinary person I have ever read about or written about.”

One of the more extraordinary people I have ever interviewed was Fred Kassab, an egg salesman living in a suburban tract home outside Cranbury, NJ. People Magazine was doing a story on Kassab, the stepfather of the pregnant woman who was murdered, along with her two toddler daughters, in 1970 at Fort Bragg, North Carolina. Her husband, Green Beret (and Princeton alumnus) Jeff MacDonald, told authorities that the family had been attacked in their sleep by drug crazed hippies. Originally Kassab supported his son-in-in law, and no charges were pressed against him by the state. But Kassab grew suspicious, launched his own investigation, and then lobbied persistently for years to get the federal government to file murder charges against MacDonald. Kassab eventually succeeded, and MacDonald is now serving a life sentence.

What kind of a man could overcome such odds in the pursuit of justice? I asked Kassab the usual questions about his parents and his upbringing. Nothing special, he replied. He grew up in Canada, served in the Canadian military during World War II, eventually settled in New Jersey — at this point he was interrupted by his wife. “Tell him the truth, Freddy,” she said. Kassab demurred. She insisted. Eventually this member of the Greatest Generation allowed that, yes, during the war he had been attached to British intelligence and parachuted behind German lines to work with the Resistance in France. Since the mortality rate of this mission was so high, a soldier was exempted from all further front-line duty if he managed to return alive. Kassab went in and came out on not one or two, but on six separate occasions. He was reluctant to talk about it.

At the time I thought that Jeff MacDonald had picked the wrong father-in-law. Having now read the books of Sonia Purnell and Lynne Olson, I realize that is a gross understatement.